Another film screening coming up, this time in Chicago! 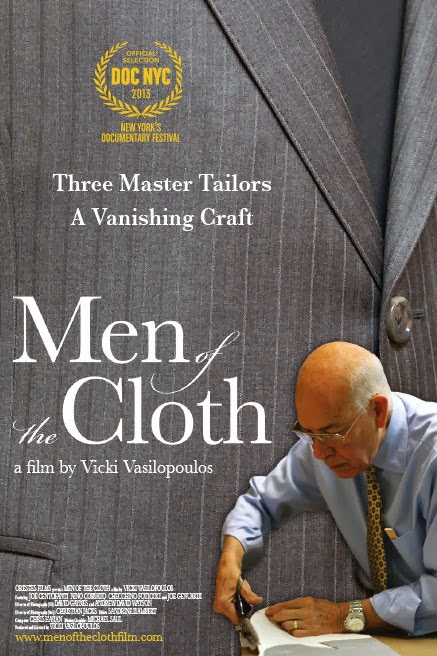 The documentary Men of the Cloth will make its debut in Chicago on April 28, 2014, in Chicago Cultural Center’s Claudia Cassidy Theater, 78 E. Washington. The film by Vicki Vasilopoulos is an inspiring portrait of three Italian master tailors.

Doors will open at 5 p.m., and the screening of Men of the Cloth will begin at 5:30 p.m. Following the film at 7:15 p.m., a panel of tailors and menswear experts will discuss the film and the bespoke industry, led by Trideep Das, managing director of JollyBrowne. The panel will include director Vicki Vasilopoulos, Nicholas Hansen of Nicholas Joseph, bespoke tailor Chris Despos, Jeffery Diduch of the Made By Hand blog and Vice President of Technical Design at Hart Schaffner Marx, head tailor Joseph Genuardi of Martin Greenfield Clothiers, and master tailor Rocco Giovannangelo of Oxxford Clothes. A reception will conclude the evening. The event is free and open to the public and students.

The film centers around Nino Corvato, Joe Centofanti, and Checchino Fonticoli, master tailors who have spent a lifetime perfecting the skills necessary to construct flawless custom-made suits for their clients in New York City, Philadelphia and Penne, Italy. Now in the twilight of their career, they fear that their Old-World knowledge will vanish with them. Enter Joe Genuardi, a tailoring apprentice who reflects the resurgence of popular interest in artisanal craftsmanship as an alternative to corporate mass production, providing hope for the future of this craft.

Men of the Cloth is structured like a triptych: each character’s story gives us an insight into the past, present and future of their craft. We see the intimate connection with their tools and the tactile nature of their trade as they work in studied concentration: sewing, pressing, cutting, marking, and pinning. The whir of the sewing machine, the clank of the steam iron, and the sharp slicing of the tailor’s scissors create an aural symphony. These artisans cherish their interactions with their clients. And as they go about their daily tasks, they share observations that are, by turns, nostalgic, poignant and humorous. Men of the Cloth unravels the mystery of the tailor’s artistry, and how he fashions a garment in such a way that it moves and breathes with the person who’s wearing it.

Director/producer Vicki Vasilopoulos was Senior Fashion Editor at DNR, the men’s news magazine (now a part of Women’s Wear Daily). Vasilopoulos was also a contributor to Fashion Wire Daily and has had features published in The New York Times, Esquire, Time Out New York and New Jersey Monthly. She has served as a film series programmer for New York Women in Film and Television. She is also a member of the Independent Filmmaker Project and the American Society of Journalists and Authors. Vasilopoulos graduated from NYU with a B.A. in Journalism and has studied at the Paris Fashion Institute in France and at The Fashion Institute of Technology.

The Men of the Cloth screening will be hosted by the Fashion Studies Department of Columbia College Chicago and sponsored by the Department of Cultural Affairs and Special Events, Mayor’s Fashion Council Chicago, Oxxford Clothes, and Nicholas Joseph.

3 Replies to “Men of the Cloth come to Chicago”