I struggle to understand this garment. I truly do.

Voxsartoria sent me a suit that he had acquired from the original owner. The coat was made in Naples by a fairly well-known and sought-after tailor, and the trousers were made by an even more well-known trouser maker, also in Naples. It is fairly common practice to farm out work like this.

First, a look at some of the external, cosmetic things. There is so much to the craft of tailoring that is hidden, that it is often said that the few details that are visible must be very carefully executed in order to convey the care (or lack thereof) given to the construction of the rest of the garment. Certain things like pattern matching were once a sign of quality but are now simply expected of even the cheapest ready-to-wear maker. The best tailors will often obsess over the cutting, balancing, matching and boxing of plaids and stripes. Chris Despos occasionally goes to very great lengths to get things to line up and balance, not because he thinks his client will ever notice, but because he is an artist who is concerned about meticulous execution. It is often one of those challenges we give ourselves just to push ourselves and expand our horizons a bit. My patchwork coat was one of those challenges.

I mention all this only to attempt to make the reader understand my intense shock when I am confronted with a garment like this. Whose many outward details were sewn as though by a beginner, or a blind person, or someone attempting to sew with their non-dominant hand. A garment which is easy to dismiss as the work of a charlatan were it not for the fact that some of the less-obvious elements, things which would never be done correctly by a novice, are actually fairly well done. Most of the techniques are very old-school and extremely time-consuming so the outward slap-dash mess is not the result of an attempt to save time. Only effort.

This expression was given as the translation of the Italian word, sprezzatura. It is meant to mean nonchalance, or an unstudied, easy approach to dressing. Carelessness, but in the sense of not having put a whole lot of effort in to one’s appearance, but one who just happens to roll out of bed looking well put-together. In this instance, the more literal reading of the world careless would apply. Or menefreghismo, meaning, “I just don’t give a shit”.

We will come back to this in a subsequent post, having examined the technical aspects of the garment without having given much thought to the somewhat more intangible aspect of how the garment might affect the wearer’s state of mind.

So. My first impressions?

This is important and will come back to us later.

Readers will have noticed that though my normal practice is to identify the maker, in this case they will remain nameless so as to avoid the appearance of my having a particular bone to pick with either of them and I certainly don’t want to negatively affect their iReputations. This is merely an examination of the work of two of the more notable tailors in a city which many hold to be the best city in the world in which to find a tailor. 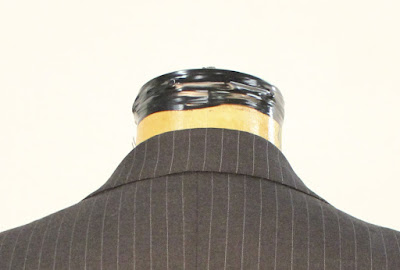 I have never been a fan of Neapolitan buttonholes. I think they look sloppy and flat and uneven. I can spot a Kiton from ten feet just by the squashed beetles on the front of their coats. These are classic examples. That being said, this is a matter of pure personal preference; they might think that my buttonholes are rigid and lifeless. Or something. So there is nothing necessarily incorrect about these, I just don’t like them. 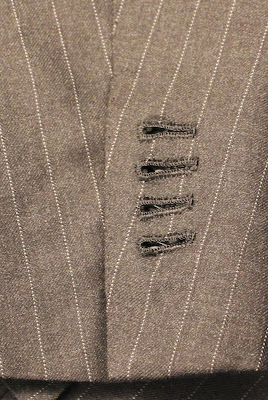 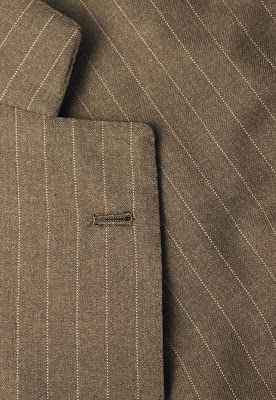 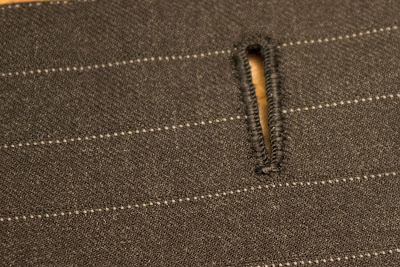 The flap pockets, however, are a disaster. Period. Never mind the need to match the stripes, which any novice knows to do, the pockets are not even cut on grain. The corners are dog-eared, the pocket lips are uneven and messy, there is a gap between the end of the flap and the pocket, and the half-moon tacks at their ends are ridiculous. The technique that was attempted is generally regarded as the correct one, but they failed miserably in the attempt. 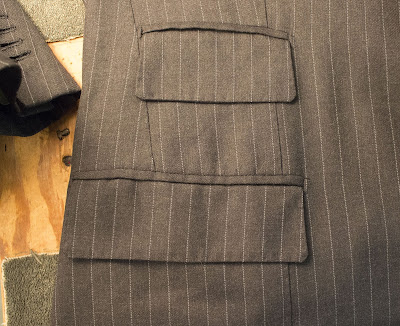 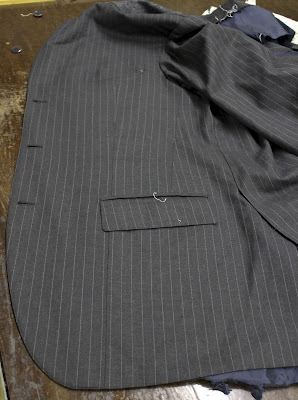 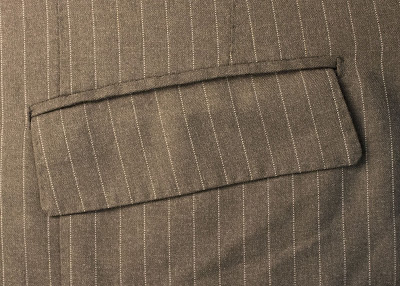 Click on the images for a closer look at the carnage. 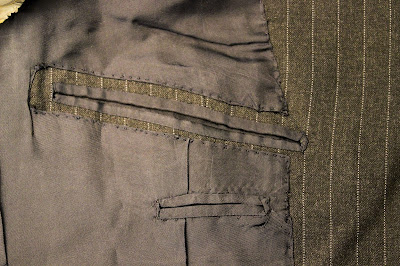 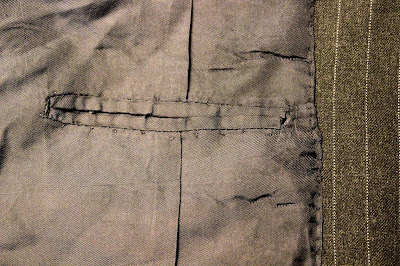 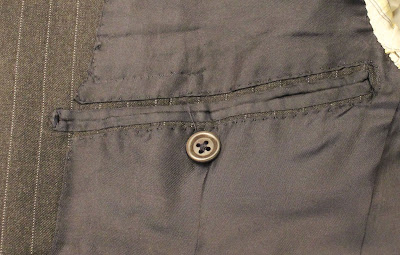 Instead of conveying care and attention to detail, the visible details of the coats are unequivocal. Non me ne frega un cazzo, they say.

I think this is a good point at which to pause in the dissection. Critics were just as harsh in their initial appraisals of impressionism and cubism and dadaism: there is perhaps more going on here than just mismatched stripes and ugly pockets. Maybe. We will look next at the guts of the garment, most of which will be lost on anyone who is not an experienced tailor, but which might provide some insight anyway. Then we will hear from the tailor himself, a story translated from his own website which gives even more to think about. And a reminder I often repeat to myself and some of my colleagues.