If you missed the previous post about the mystery disaster suit, go back and start there. This week we look a bit at the cut and the inside of the coat. 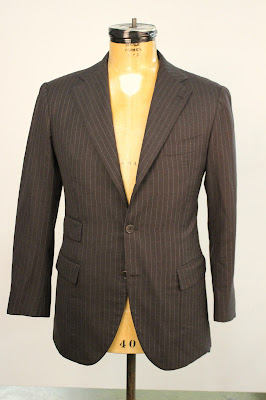 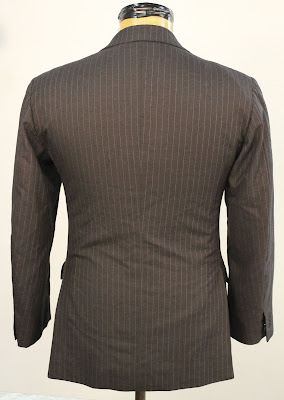 First impression? This is very reminiscent of old Anderson and Sheppard cutting. Either the original owner had a very tiny waist, or, more likely, this was cut for a normal person but a liberal amount of drape was cut in the chest and blades, the shoulder is extended, and it has wonky sleeves, particularly in the undersleeve. The front dart is extended all the way to the hem in typical Neapolitan fashion. My feeling is that anyone who is or was a fan of the A&S style of cut would like this style of coat.

The extended front dart is something that is typically associated in early cutting with Drape- it was part of a manipulation for adding drape to the chest but keeping a trim waist and hip. This first image is from an English publication explaining the manipulations done to a normal lounge coat pattern to convert it to a drape model and shows the extended dart. 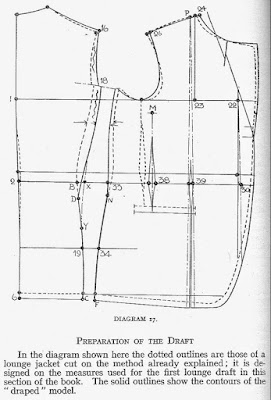 This second draft is an image of a page from a student’s workbook from the time when he was studying at the Scuola Artistica di Taglio (Artistic Cutting School) in Naples in the mid 1950’s. The front dart is in evidence here. Sandro was a very close friend of mine and a fantastic tailor but passed away a few months ago. He is missed. 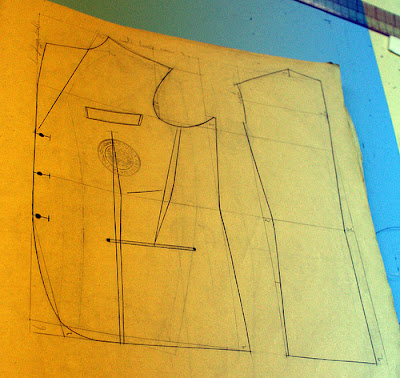 Later drafting methods transferred the value of the portion of the dart which falls below the pocket to the underarm seam- you get the same effect but the pattern in the cloth is undisturbed below the pocket so this kind of dart is almost never seen except from Neapolitan tailors who treat it as a sign of distinction. I noticed that Paul Stuart was showing some garments which included this anachronistic mode of cutting recently and it wouldn’t surprise me at all to see Ralph Lauren doing some of it.

In typical fashion, the seams are all lapped, which is to say that both seam allowances are pressed to one side instead of being pressed open. This gives a bit of a ridge to one side of the seam, and those ridges have been pick stitched flat. Though it is not obvious from the outside, the shoulder seam has been sewn by hand and the sleeves have been set by hand. Both also have lapped seams. Of particular interest is the treatment of the seam allowances at the armhole. Naples is said to have two different shoulder treatments- “con rollino”, which is similar in treatment to a rope shoulder, where both seam allowances are pressed toward the sleeve and a fairly liberal amount of wadding is placed in the sleeve head, and “spalla camicia”, or shirt shoulder, where the seam allowances are both turned toward the coat; very little or no wadding is put in the sleeve head and this sleeve has a very low, round expression. Often a good deal of fullness is cut into the sleeve so shirring is evident, often called “grinze”, or “spalla a mappina”. Most commonly the seam allowances are pressed open, and a moderate amount of wadding is inserted to keep the sleeve head area clean. It should be noted that the shirring would be evident on just about any sleeve that had no wadding- in fact, the wadding is placed in order to mitigate the shirring effect. It is entirely a myth that the shirring is some mystical, complicated thing that can only be done by hand- it is merely the result of having a sleeve which is larger than the armhole. All sleeves are larger than the armhole and the degree to which it is larger will determine the amount of shirring present, which is either left as is or cleaned up by the presence of sleeve head wadding. 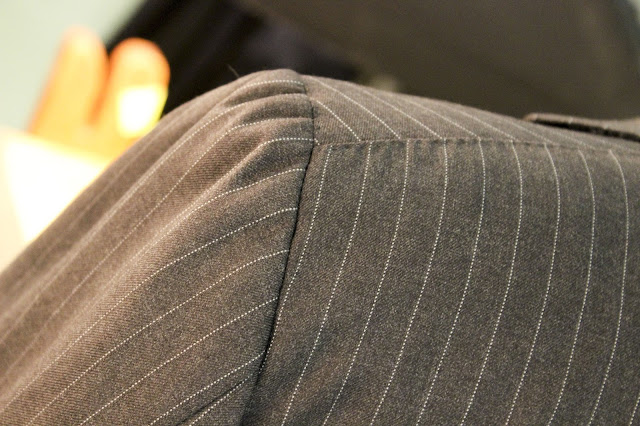 What is particularly interesting in the case of this coat is that the shoulder treatment is something of a hybrid between a “con rollino” treatment and the more conventional one in that the portion of the armhole behind the shoulder seam has been pressed toward the sleeve in the “con rollino” fashion, and the front has been pressed open. I expected the “spalla camicia” treatment since this tailor claims on his website to do it, but perhaps the original owner requested this. It doesn’t really matter- it’s just interesting from a technical perspective. There is a double-folded, bias-cut piece of domette, the woven flannel sometimes used in the chest area to cover the hair cloth, as a rather bulky sleeve head wadding. Definitely “con rollino”. There are two pieces of domette pad stitched together to form a type of shoulder pad- this would give a very soft, supple support to the shoulder area. 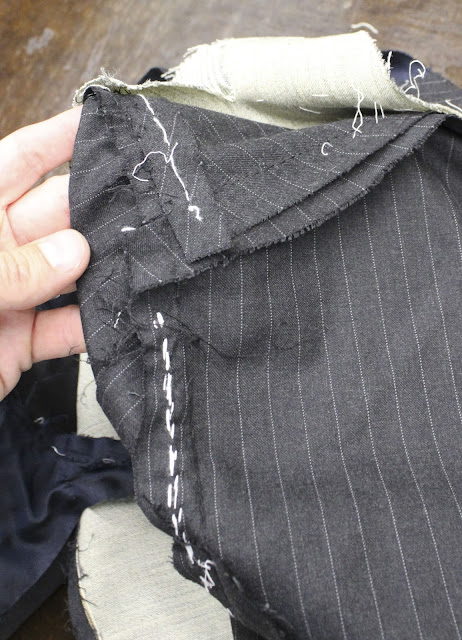 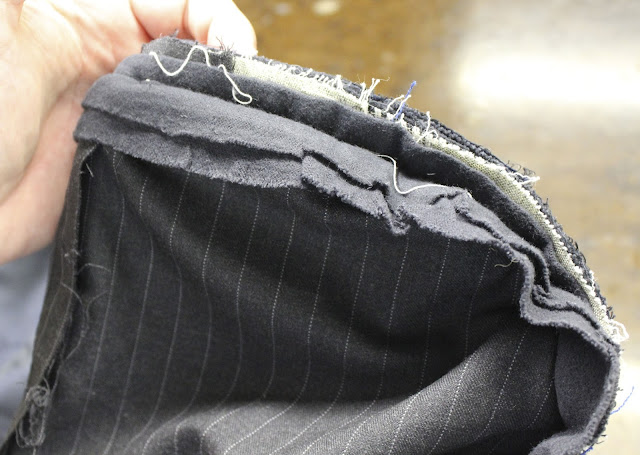 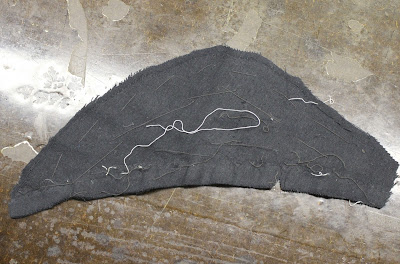 The wool canvas used in the front of the coat is a much more robust canvas than I would have expected. It is not stiff or firm, but a bit on the heavy side and very densely woven so the front has a lot of support and a decent roll to the lapel. Conversely, instead of haircloth, which is fairly firm, a medium-density hymo has been used in the upper part of the chest and a second layer of wool canvas in the lower part. They are covered in the same domette as was used in the sleeve and shoulder. There is a fairly large chest cut which I feel is necessary to support the drape and give shape to the chest. It is obvious that the cut and construction of the coat were done with softness in mind, but there are indications that the tailor was also concerned with giving some support to the coat so it wouldn’t be completely lumpy and messy, as some draped coats are prone to being. 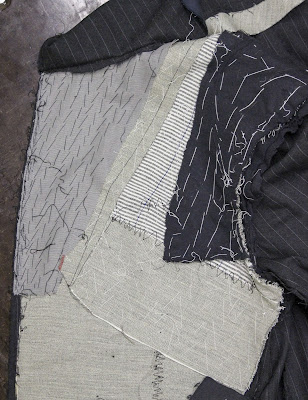 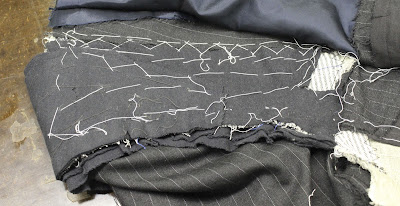 It is not uncommon to add a piece of silesia to the ends of the collar and sometimes the lapel, sandwiched between the cloth and the canvas. I was intrigued instead to find wiggan on top of the canvas (the sort typically used in hems of sleeves), and they weren’t pad stitched as one unit, which would be the typical method- removing the wiggan I found that the collar and lapel had been pad stitched first, then the wiggan applied and pad stitched a second time. The facing has been drawn on by hand, something we don’t see very often any more, as many feel that the machine gives a stronger, sharper line to the edge. Doing the facing edge by machine, though, requires a good amount of experience to judge the placement of the fullness, since we are working right sides together, sewing from the wrong side. Fullness is a bit like salt in cooking- just the right amount is required; too little and the lapel won’t roll, and too much makes for a puckered front. When drawing the facing on by hand we are working from the outside so it is practically impossible to misjudge the placement or fullness, and the shape of the corner at the notch. Peaks especially benefit by this kind of treatment. It is much more time-consuming but much more foolproof than doing it by machine. 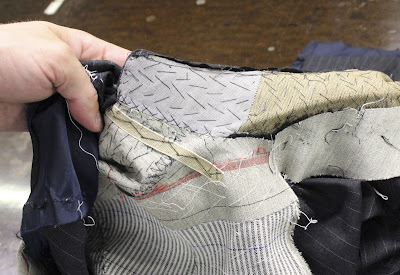 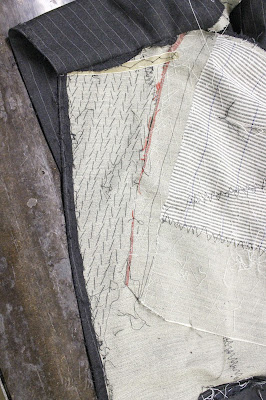 The back of the neck is supported by a piece of canvas- this is more typically done with wiggan or silesia. Sandro, my Neapolitan friend, would call this piece a “soffietto”, but I never asked him why. 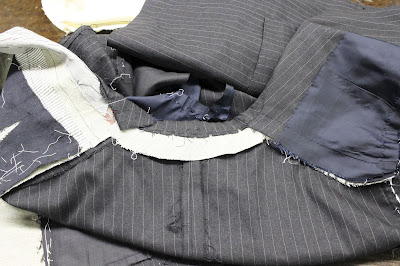 This was clearly made with a lot of consideration given to the internal construction, which makes the visible portions of it all the more puzzling. Pockets, lining, collar matching are easy compared to getting a clean front, lapel and collar, yet those are well done. The back of the sleeve is ugly to my eye but in this it is more of a personal preference. I would much prefer a sleeve which looked like this one done by Steed

BUT the way these sleeves have been cut will give some additional mobility. The drape in the blades, the soft chest and shoulder, and this wonky, overly long undersleeve all combine to create a garment which I imagine would be VERY comfortable, if a little bit sloppy looking.

Let’s sit and think about that one for a while.

11 Replies to “Menefreghismo, part 2- The Guts”